When you hear the word minimalism, what do you think of? What associations does it conjure for you?

Perhaps you think of some of the following:
* no luxuries
* bare walls and empty rooms, with perhaps just one chair
* restriction
* saying no to everything
* no hobbies
* no crafts

Perhaps you imagine a kitchen drawer with one fork, knife and spoon.  Or a cupboard with a single glass, cup, plate and bowl?

For me the idea of minimalism was simply unattainable and unworkable.  There have been times in the past when, overwhelmed by "stuff" I've longed for a simpler lifestyle, even been tempted to chuck everything out and start over...and I mean *everything*.  But, by and large, it was something I dismissed as unrealistic and stressful. Plus I'm just not the sort of person who is minimalist.

I am a messy person.  Ask anyone who knows me well to describe and "tidy" and "organised" wouldn't feature highly on their list.  Actually, I don't think it would feature anywhere on their list!  I remember when I decided to become a teacher, my mum looked at me aghast:  "You can't organise yourself; how will you manage to be organised enough for all your students too?"  Honestly, Mum, I've no idea.  I think I've spent the last 10 years in some form of organised chaos, expert in the art of stashing, hiding, and transferring.  Now, however, the cracks are really showing!

I've been intrigued by the idea of minimalism, but never really thought it could work for me.  And then I stumbled across Matt D'Avella, director of Netflix documentary "Minimalism".  I haven't watched the documentary.  His videos turned up in my recommended feed on YouTube and I started watching his videos as a result - quite by accident.  Or serendipity, if that's your thing.

His fresh approach really resonated with me, as he challenged the preconceptions of minimalism and encouraged viewers to take a different stance.

For example, in one video he shared his wardrobe and that he has 24 t-shirts.  Cue outrage!  "You can't be a minimalist if you've got 24 t-shirts!"


I've linked the video below where he addresses this criticism.  It's well worth a watch.


So, as you can see, minimalism doesn't have to mean living with one t-shirt, one pair of underwear etc. etc.

Now Matt's videos make a lot of sense to me, and have encouraged me to give it a go.  He worked his way out of debt in 4 years, and runs a successful business doing something he's passionate about.   I'm in a situation where I need to be frugal and organised, as I leave my long-term stable career as a teacher to try and make it as a self-employed indie-dyer and tutor.  The organisation bit really really matters to me right now.  Let me show you a clip here of my dining room at the end of my working week before Christmas...

I have very little storage space in my home, and I'm finding the process of unpacking and repacking my business everyday too much.  Often we don't see the dining table until we've got company coming, and end up eating on our knees in the lounge.  This is no bad thing, but just not the way I'd like to do it personally.  So the idea of exploring minimalism really appealed to me.

To have minimalism re-packaged as "living intentionally" and with "enough" rather than more than you need, was refreshing.  It made sense.  Matt is a video-maker and he has a lot of camera equipment.  It doesn't go against being a minimalist to have this, because he needs it for his job.  Just like he needs 24 t-shirts to fit with his routine.

Watching his videos I've become encouraged to give minimalism a try - even though it might seem like a contradiction in terms to be a minimalist and a maker and that's something I really want to explore in this series, if you'd like to follow along!

My first steps in minimalism 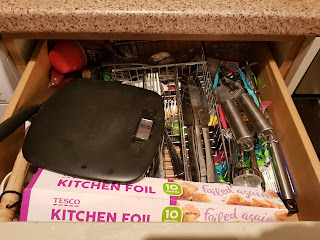 At the time of writing I've already taken steps towards this minimalist lifestyle, and more intentional living.  First up was my cutlery drawer.  I pulled out everything, and left my husband and I with 6 forks, knives, dessert spoons and teaspoons.  When I told my family, they mocked me - that's not minimalist!  You should have one spoon each! 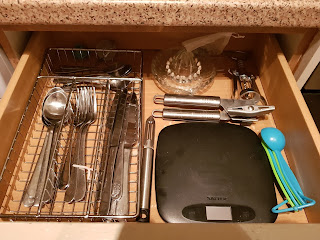 I smugly pointed out that if I didn't have 6 of each, they'd be eating their dinner with their fingers and they soon realised the logic of what I was saying.  We regularly have two to four guests for dinner when we entertain (although that's less frequent these days).  Therefore having 6 of everything is what we need.  We didn't need 12-14 of everything, which is what we had.

I felt a huge sense of achievement and also like a weight had lifted off my shoulders when I had completed this simple task.  The cutlery drawer is something that has always been a total mess and a source of stress in its own small way.   Actually, just looking at the "after" photo when writing this blog makes me feel really happy!

From there we've made the decision to get rid of our "everyday workhorse" crockery and just use the one we'd "saved for best".  We like using it; we don't have room for two dining sets really; why not just use the best one?  We deserve it, right?

Plus there's the added bonus of no longer having to play dinner-plate Jenga!

I would love to hear your thoughts about clutter, minimalism, and organisation.  Have you ever been tempted to try it? Have your preconceptions about minimalism been challenged by what you've read today?  Let me know below! 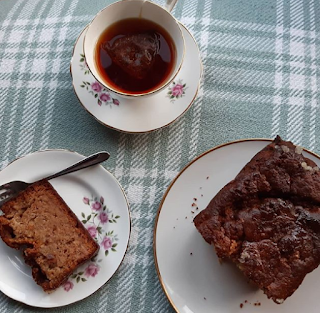 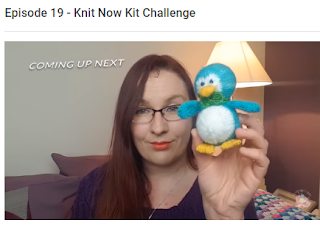 Hello friends, It seems like I've written about this a lot this year (and as the year is only 8 weeks old, give or take, that's impressive) but as you know another change has come upon me in the past couple of weeks so once again it's time to take stock. I've been doing a lot of thinking - what else do you do when you've had to quit the day job? - and thought it might be time to share some of it with you! Firstly, though, let me say a heartfelt "thank you" for your kind wishes and support over the past year or so, but especially over the past couple of weeks as I've struggled to come to terms with my PTSD and also gone through a particularly challenging emotional time of my daughter's first birthday.  Your love, support, encouragement and general loveliness has meant so much.  Thank you. Secondly, I need to apologise (sorry, Aileen!):  I try to keep the blog, instagram and the podcast all fairly independent of each other in order to keep th
Read more